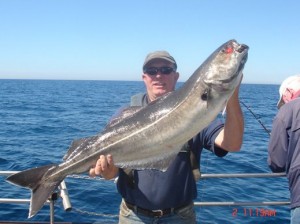 In the bay one can catch:

Tackle can be rented at reasonable rates, if required. Further offshore, due to the effects of the Gulf Stream, sharks can be caught. All fish are tagged and released in the interests of conservation. Wreck fishing is available and many wrecks are in close proximity to Courtmacsherry.

Other notable catches include blue shark to 2.49mtr, all skate and shark  are tagged and released.