Shark fishing is still producing some great fish even though mackerel shoals were on the slim side all season,yesterday the 19th Sept we tagged 5 fish the heaviest a fish over 2 metres,lost 2 and had quite a few others around the boat.Its great to get news of the Tagging programme and dispatches from Shane O Reilly of the Inland Fisheries stated that 2 of the Blues that we tagged in 2009,one was recaptured on the 7th March 2012 in posn 1100km West of the Azores and the other on the 15th February 2012 was recaptured 1000km E of Newfoundland,both fish were tagged a few weeks apart and had very different journeys,the Azores fish travelling 3050m and at Liberty for 946 days,the other 2350 m and at liberty for 905 days,it goes to show that the programme is very worthwhile with the information gained from the migratory pattern of the sharks.

Courtmacsherry is still producing ton up skate with several more caught in the last few weeks,On the different species we have Pollack to near specimen weight ,thornback Ray to 16lbs,Ling to 21lbs,conger to 35lbs and other species include Coalfish,Bull huss,plaice,dabs,gurnard,whiting,haddock,dogfish,mackerel.

On the inshore and estuary scene,several good Bass to 4 kg were caught near the Horse rock,good Bass fishing reported  with live sandeel from the Woodpoint,Specimen Giltedged Bream from Burren Pier,other smaller fish from the coves. 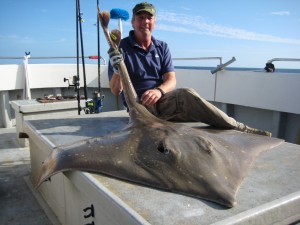 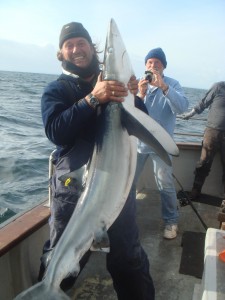