The fishing the last week has been good with both the inshore ,offshore and Estuary producing some great sport for Anglers from Ireland ,England,France,Belgium,Holland ,Lithuania ,and Poland.Offshore the inshore wrecks producing lots of Ling , Haddock and Whiting  to near Specimen weight,conger to mid 30s Pollack to 11lbs and medium Coalfish.Several sharks lurking in the wreck were attacking the fish on the way up and Ronnie de Sobre from Belgium had a great fight on light spinning gear with a blue aprox weight 60lbs while retrieving a Pollack from the wreck.The Blue broke the trace beside the boat but what a fight!On the reefs plenty Pollack,good size Cod best method baited Perks,the heaviest though taken by Marcel Wuyts on a flowing trace on a deepwater reef.Plenty of conger up to the 25lb mark.On the day we devoted to sharking the weather conditions were difficult but we managed 5 runs with 2 tagged,the heaviest a fish just over 2 M for Anthony Hislop.The self drives had good Pollack fishing with fish over 10lbs and drifting for thornbacks produced fish to 9lbs,with good dabs as well.In the estuaries of Courtmacsherry and Clonakilty ,Bass were being caught on sandeel and lures,the heaviest  I heard of was a fish of 6.5lbs,with lots of schoolies taken at the Woodpoint on spinners and Lures 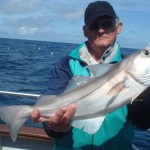 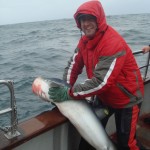