Courtmacsherry Angling News.
Hi All,
The weather has been poor but the fishing off Courtmacsherry has been very good the last few weeks.The Pollack fishing has produced some fish near the Specimen weight with several fish over the 10lb mark,Ling to Specimen weight off the inshore wrecks and inshore reefs producing Ling to 20 lb,Cod to 14lbs with plenty medium cod caught on baited feathers on rough ground,coalfish,dogfish,bullhuss,conger to 30lb,Pouting ,wrasse and mackerel were plentiful.On the 5th June Rob Kengen hooked into a Common Skate 3 hrs later and after 5 dives in 45m of water we had the fish beside the boat but with only a 50lb mono trace it parted before we were able to get it gaffed and onboard for tagging.The fish fought so hard due to the fact that the hook was into its wing,aprox weight was 190lbs.Paddy Mc Keown landed a skate yesterday the 6th,  aprox weight 40lb,we also caught conger,Ling,cod,Pollack,Bullhuss,dogfish,pouting,whiting,coalfish,mackerel quite a variety on the same mark.Fishing in the Estuary has been quiet due to the closed season for Bass,but several good mullet landed off the pontoon and pier area.Sandeels are plentiful in the Estuary so I think there are plenty of Bass around for when the season opens,
Regards Mark. 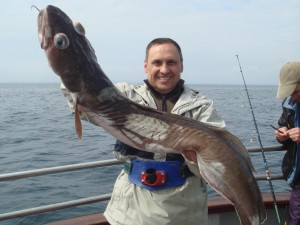 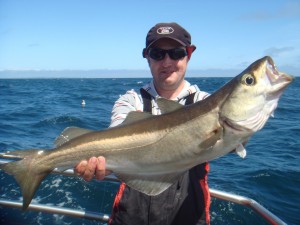