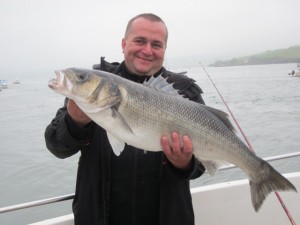 Hi All,
The fishing in Courtmacsherry the last week or so has been good with plenty of Fish in the bay.Pollack to 10 lbs were common,Cod to 15lbs,shoals of coalfish average about 3 to 4 lbs,conger to 30 lbs,Ling on the inshore wrecks to 20lbs,Mackerel were plentiful but small.Ton sol from Amsterdam a frequent visitor to Courtmacsherry along with Krzysztof Knopp and Mihal Figlarz 2 of his colleagues from Poland chartered the Lady Patricia skippered by Niall O Sullivan last week.The weather was blustery with winds mostly south to southwest.On the inshore wrecks they caught plenty of Ling to 20lbs,While skate fishing Krzysztof Knopp landed a fish over 170lbs which took over 2 hrs to land.Blue Sharks were caught to 2.35M and plenty of medium sized Cod and Pollack.The joey mackerel were plentiful and on the Wednesday with conditions deteriorating it was decided to head for the Harbour and fish for Bass with live joeys.The tide was on the flood and Krzysztof had a good run,striking the fish which took 50 m of line he played the fish for 25 mins,when landed the Bass weighed in at 16.5lbs probably the biggest Bass landed this season.On Sunday the 2nd October with a French contingent from Boulogne sur mer fishing after the rugby game of course we headed out in the bay with very foggy conditions and a swell from the south,Plenty of Cod and Pollack to 10lbs using live joeys and at anchor we caught conger to 30 lbs.On Monday we headed out to the Sharking grounds and caught Blues to 2.20M,
Regards Mark