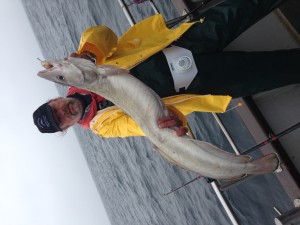 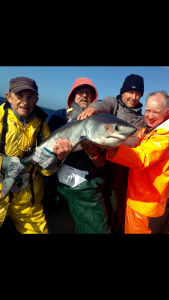 The weather was not kind for the fishing week but we still managed a bit of crack and some good fish,the highlight of the trip was Robert catching the clubs first Porbeagle,a fish of aprox 40 lbs. 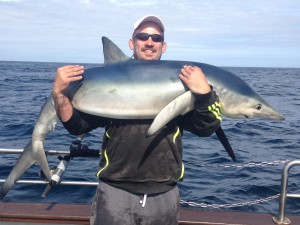 The fishing this week got off to a bumpy start with southerly gales on last Friday ,the wind then veering to the southwest for the weekend. 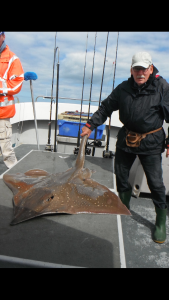 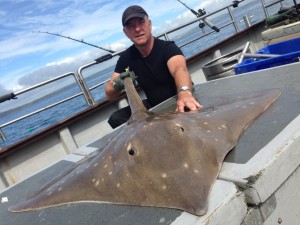 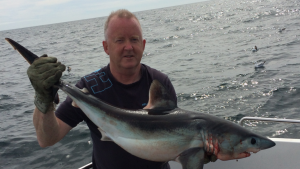 On the Saturday the water was very heavy,just managed ,mackerel,pollack and Coalfish with a good few dogs at anchor.
The Sunday with improved conditions we ventured out to the shark grounds and to our delight landed 2 Porbeagle Sharks the heaviest 1.61M in total length,and today another landed of aprox 30lbs,other porbeagles have been landed off the west cork coast the previous week so hopefully we’ll see more of them in the coming months.
The other days good blues to 2.1M ,tagged and released and this week caught my smallest shark ever at 2lbs,must of been born a few days ago, skate fishing producing fish to aprox 100lbs.Conger to 35 lbs,Ling to 18lbs,bullhuss to near specimen weight at 13 lbs and plenty of medium pollack Coalfish and cod.
The selfdrives not having much success on the ground fishing,the water still a bit mucky from the previous gales but good pollack still being landed,a big change from last week where we had good catches of bass,Thornbacks,plaice and dabs.
Fishing with bait for bass produced some good fish to 8lbs from the boathouse area with crab the preferred method,hoping to try a few live baits this weekend.
On another note my friend and client of many years Dirk,celebrated his 49th fishing year in Ireland and he marked the occasion by landing a common skate of aprox 80lbs,congrats Derek

We’re having some beautiful weather at the moment. The fishing at Courtmacsherry has been very good lately with the offshore, inshore and estuary fishing producing good catches. The bass fisherman had to work hard for results but fish to 8lbs 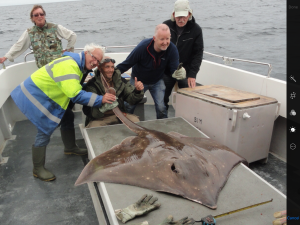 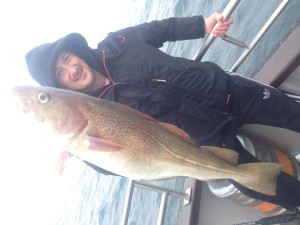 were landed at the boathouse on peeler crab. On lures, the going was tough with very few fish taking. Live bait produced fish to 7 lbs. Flounders are also being caught off the old school house with a few gilthead bream landed at the Burren pier.In shore the pollack fishing has been good with the Old head fishing very well of late. It always seems to fish better on the ebb tide. Pollack to 10lbs with cod to 14lbs landed. We’re also getting congers to 39 lb, ling to 15lbs. In this general area we’ve had skate to 176lbs(aprox weight) landed with several other fish to the 100lb mark.

Sharking has been very good so far this season but the fish at the moment are on the small size,the biggest this year was total length 2.25m. Generally Sharking is producing about 12 fish a session.
On the wrecking front; plenty medium sized ling. Hope to venture offshore next couple of days where we may get a specimen Ling.

Sharking has been very consistent with fish to 2.20m,some very small sharks also one of 4lbs the smallest I have ever caught.Good reef fishing with a good mix of species,pollack,cod,conger,bullhuss,Coalfish,wrasse,Ling and Thornbacks ,skate to 170lbs 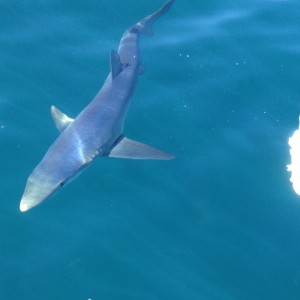 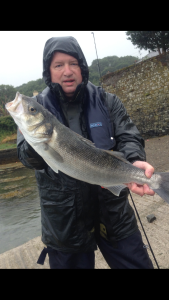 Courtmac where the fishing never stops 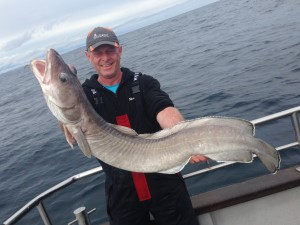 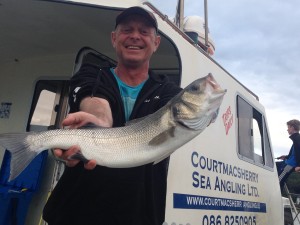 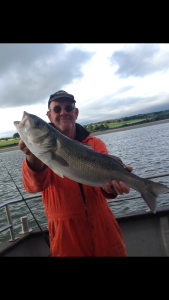 Both Mervin and Kees after having good days on conger,Ling and Pollack took up the offer of an evenings bass fishing,both had good success 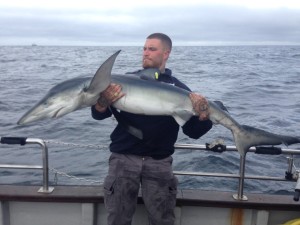 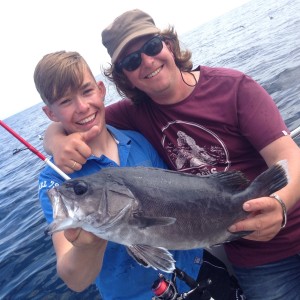 Near specimen stone bass for sean with Hanno

With the settled weather ,the shark fishing has been good with plenty of blues around the 2m length for my French,Dutch,English and Irish clients,also fishing on the bottom while drifting for shark has been exceptional with specimen whiting,good size hake and haddock.Plenty of pollack to 7lbs ,conger,Ling,Bullhuss, and inshore the selfdrives have been catching plenty of Thornbacks,plaice,dabs and fine pollack 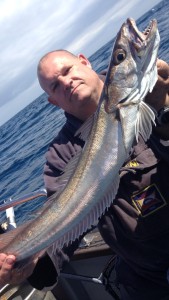 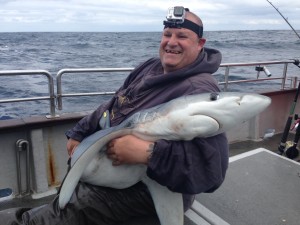 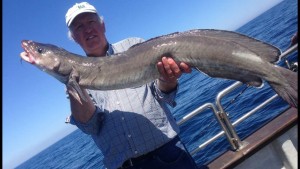 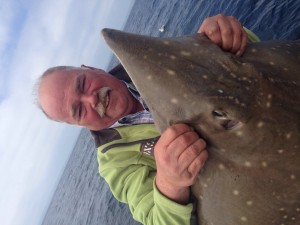 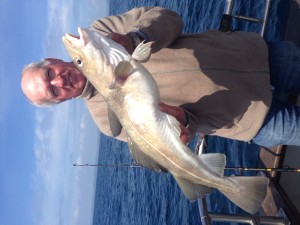 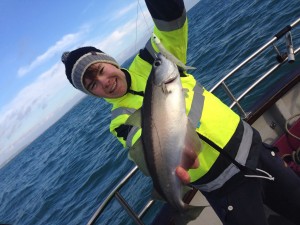